My environment, prior to any upgrade, looks like this:

After upgrade, the following will be introduced: 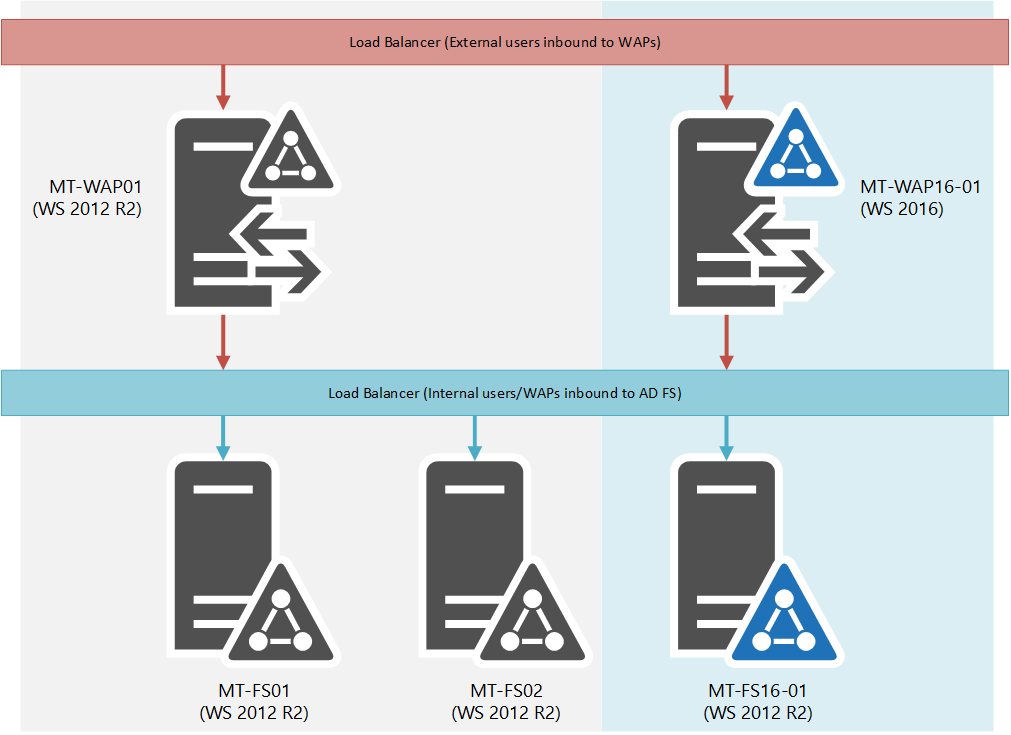 Congratulations! Your AD FS farm now has a Windows Server 2016 server that can answer federation requests.

Step 3: Promote a new server to be primary

AD FS has the concept of primary and secondary servers. Primary servers have a writable copy of the database, while secondary servers have a read-only replica of the database. Servers have no way of negotiating their role in the AD FS farm, so each computer must be updated manually: Firstly, on the new Windows Server 2016 computer, set it to be the primary computer. This enables its database for changes, and means it will no longer sync its configuration from the previous primary computer.

On all other AD FS servers, run the following command to enable them to retrieve their configuration from the new primary computer. All servers must be updated, as they’ll be configured to point to the old primary server which will soon be merely a secondary server.

On the computer that was previously the primary computer, run the following:

On other secondary computers, run the following:

Now that you’re running a Windows Server 2016 primary AD FS computer, you can start using some of the “cool new stuff” that comes with Windows Server 2016. Firstly, let’s use the new Get-AdfsFarmInformation cmdlet to make sure we can see our new server:

The great news here is that provided your Windows Server 2012 R2 servers can access the new AD FS server(s) by hostname, these will just keep on trucking

If you want to go the whole hog and upgrade your WAPs to Windows Server 2016 at the same time, that’s pretty straightforward too. First, build yourself a Windows Server 2016 server or two and get them on your network. Don’t domain join them. Install the certificate you wish to use for the WAPs (typically the same as the internal AD FS servers, but not absolutely necessary. The name must match, at least.

The good news is that your Windows Server 2012 R2 AD FS and WAP servers can now be removed – all functionality has been cut over to Windows Server 2016. How hard is that? Easy. Just uninstall AD FS or the Remote Access role from the servers.

Hit Y when prompted, and in a few minutes your farm will be running at functional level 3. We can verify this:

How cool’s that? Open up the AD FS console and you’ll see all the cool new commands. You’ll also be able to run a bunch of new stuff in the ADFS PowerShell module such as: